PARIS, FRANCE – MAY 29: Serena Williams of USA celebrates her first round victory during Day Three of the 2018 French Open at Roland Garros on May 29, 2018 in Paris, France. (Photo by Jean Catuffe/Getty Images)

23-time Grand Slam winner Serena Williams made her return to the French Open in the most stylish way possible – in a black catsuit with a red waistband.

According to BBC, speaking to reporters after her 7-6 (4), 6-4 victory over Kristyna Pliskova, Williams said the suit made her feel like a superhero. She said:

I feel like a warrior wearing it, a queen from Wakanda maybe.

It feels like this suit represents all the women that have been through a lot mentally, physically with their body to come back and have confidence and to believe in themselves.

The suit is, however, not only fun but also functional. 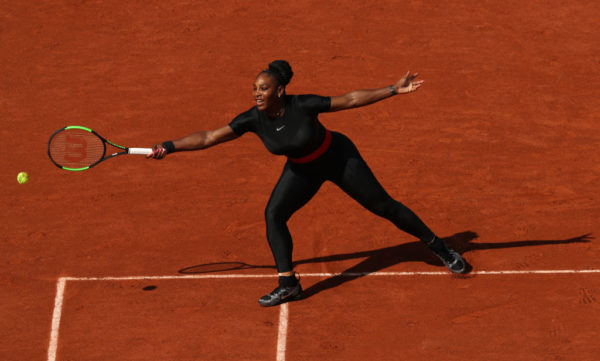 PARIS, FRANCE – MAY 29: Serena Williams of The United States serves during her ladies singles first round match against Kristyna Pliskova of Czech Republic during day three of the 2018 French Open at Roland Garros on May 29, 2018 in Paris, France. (Photo by Matthew Stockman/Getty Images)

She was plagued with blood clots after birthing her daughter back in September. The full body suit is known to help with circulation. Speaking on the clots, she said:

I had a lot of problems with those – I don’t know how many I have had in the past 12 months. It definitely has little functionality to it.

It’s a fun suit, but it’s also functional so I’m able to play without any problems.