Big Brother Naija housemates, Khafi and Omashola were spotted sharing hugs and kisses in the kitchen after a successful task on Saturday. 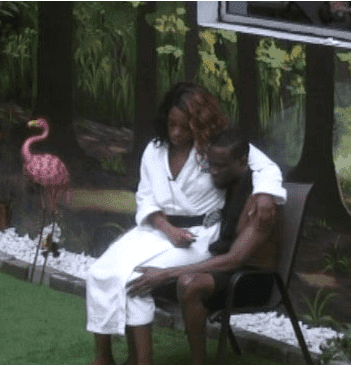 Dating rumors between the duo have been flying and the video has also caused an online debate among web users.

Some have opined that they are just close friends who were just celebrating their Five Million Naira win, courtesy of the Indomie Challenge.

While others stated that the duo have shown some level of closeness between each other since Khafi’s lover, Gedoni left the house.

Jtowncluster ng. recalls Omashola had blurted out that if he wanted to have sex with the British police officer, he would do it without a care in the world.
Watch the video below: